In honor of the Seattle Sounders advancing to the MLS Cup, I decided to knit a pair of socks that included the Sounders team colors, blue and green. I finished the first sock during the MLS Cup. And what a game that was! The Sounders claimed their second MLS Cup title in a 3-1 victory over the Toronto FC in a sold-out Seattle venue.

I was planning to work on the second sock during Monday Night Football, which had the Seattle Seahawks (their main colors are also blue and green) playing against the San Francisco 49ers. However, that game was so exciting (in a heartattack-inducing way) that I was not able to knit during it at all. Fortunately, the Seahawks also won, which motivated me to finish the socks quickly. I don't usually wear team jersey or other sport team apparel, but I will proudly wear these socks to show my support for these amazing teams. 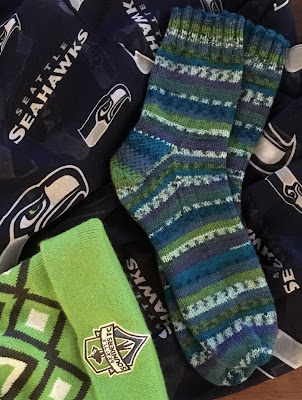 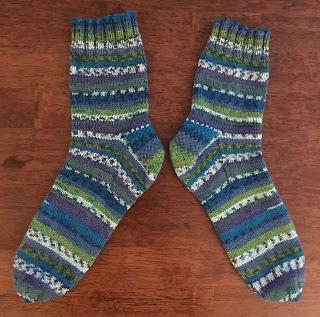